A Chic Update to a Longtime Living Room

Old, new, borrowed, blue
“When people have been together for a while, they have their own collections [and] special things gathered over time or inherited from family,” says Linda Weisberg, owner of Newton, Massachusetts-based LW Interiors. This was true of the couple who sought Weisberg’s help to update the family room in their ninety-year-old, Tudor-style home, also in Newton.
Weisberg’s design process helps homeowners critically review their possessions and discover what matters most to them. “As a designer, you help families make decisions so that everyone feels they are getting what they want and what they like,” she says. “After I get a sense of what will stay, I try to bring a fresh look by thinking through how things can be reused or repurposed.” For this project, Weisberg transformed old pieces, purchased new pieces, borrowed items from other rooms, and drew inspiration from the blue color in a rug that the homeowners loved.
First, Weisberg tackled some of the most overwhelming elements of the room’s architecture. “This room originally had orange cedar walls and red brick,” says Weisberg. She used warm-beige paint to neutralize the materials while maintaining the character; the roughness of the brick and the holes in the cedar paneling give depth to the neutral color. Tudor homes are also known for dark ceiling beams. Painting the beams white to match the ceiling allowed them to recede into the background. The old beehive fireplace was also modernized. Once wood-burning, it was converted to gas, which required adding custom doors. “That updated not only the function but also modernized the look,” says Weisberg.
Originally, there were valances over each blind-covered window. The valences were removed but the blinds stayed. “The look of the blinds was very clean, so we kept them,” says Weisberg. Another element of the room was kept as-is. “They kept the chandelier that came with the house, and I thought they should keep it,” explains Weisberg. “I have a New York Times design magazine that’s twenty years old with that chandelier pictured in it. Sometimes people paint a chandelier like that, but I thought we should leave it in its original form.”
In the living room, the chandelier and blinds were kept as-is, and a repurposed console table was placed under the television; all elements now blend seamlessly with the redesign.
Living Room
Updating an older home doesn’t always mean rip and replace. In this home, paint neutralizes the walls and ceiling, allowing reupholstered furniture to take center stage. 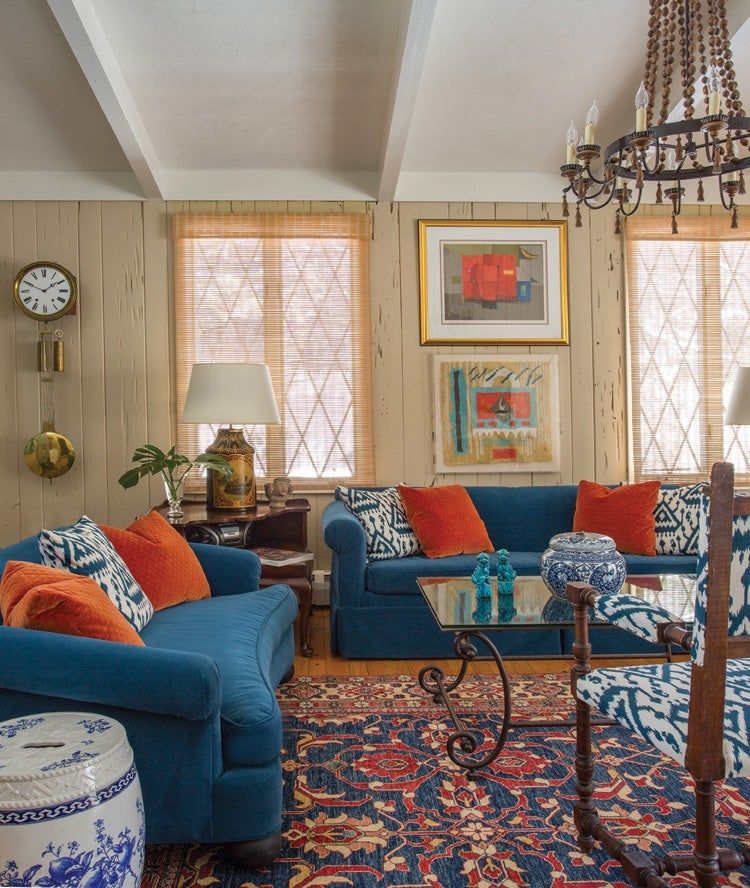 Colors used in the room were drawn from the homeowners’ existing Oriental rug. “I think it’s very pretty. It was a good decision to start with the colors in it,” says Weisberg. The rug inspired the reds, blues, and neutrals used in the room, as well as the use of orange hinted at in the rug’s red undertones.
The homeowners’ sofas were several years old but were still comfortable and in good condition. Weisberg reupholstered them in blue velvet similar to the color found in the rug. A second chair was borrowed from another room and reupholstered in a neutral velvet. The other two chairs in the room were vintage finds purchased for their unique styles. One is a Louis XIII–inspired design with elaborately turned legs and stretchers. “I like to use these old styles but then add a fresh fabric to make it different,” explains Weisberg. The high back and fluid arm design are common for that era and the chair is covered in an orange, quilted velvet. The other chair is Jacobean style with a low back and straight arms, now covered by blue-and-white ikat. Throw pillows covered in the ikat and velvet fabrics grace the sofas and tie all the seating together. 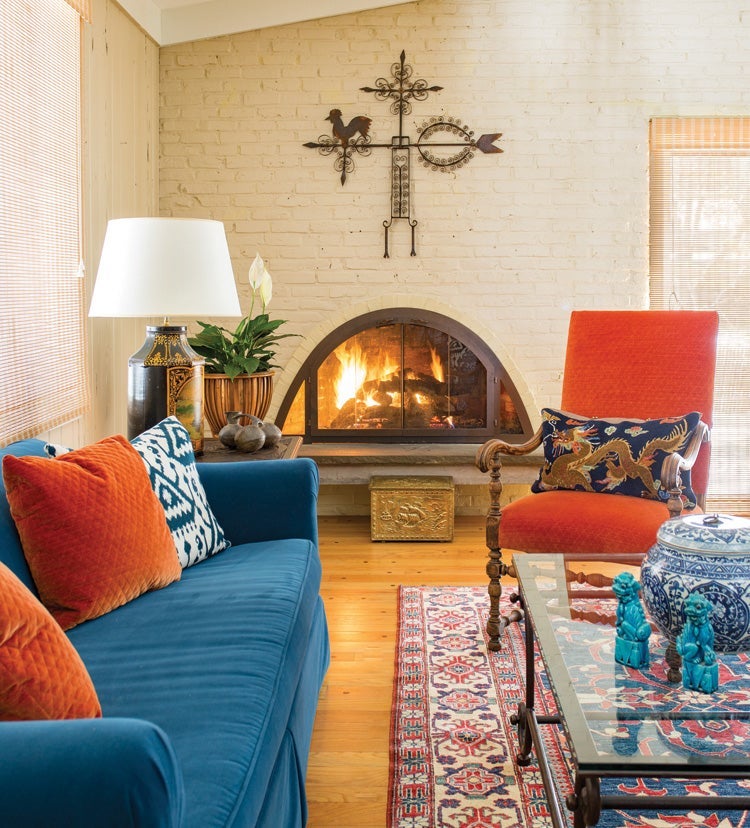 The iron and glass coffee table in front of the sofa is a new purchase. “I love glass coffee tables with Oriental rugs or rugs with beautiful patterns on them because it opens up space visually; it creates a better expense,” says Weisberg.
An old coffee table was repurposed and adapted into a console table that now sits under the TV. “The original coffee table was oversized and very dark. I thought it would be good to lengthen the legs and make it a library table,” says Weisberg. “I had someone add architectural pieces to that table to lengthen it and then stain the colors to match.”
When accessorizing the room, Weisberg again drew from the homeowners’ collection. Milk-can lamps, borrowed from another room, flank the sofa. A brass skeleton clock hangs on the wall as do several framed vintage posters. A weighted hook hangs near the fireplace and a wrought-iron weather vane sits above it; both were obtained during travels by the homeowners. Blue Chinoiserie accessories finish off the room—garden stools, a cushion embroidered with a Chinese dragon, a decorative jar, and ceramic lion figurines.
“I had great pieces and great bones to work with in this room,” says Weisberg. “Redoing, remaking, and reusing some of these pieces was challenging, but I would say it was a labor of love.” 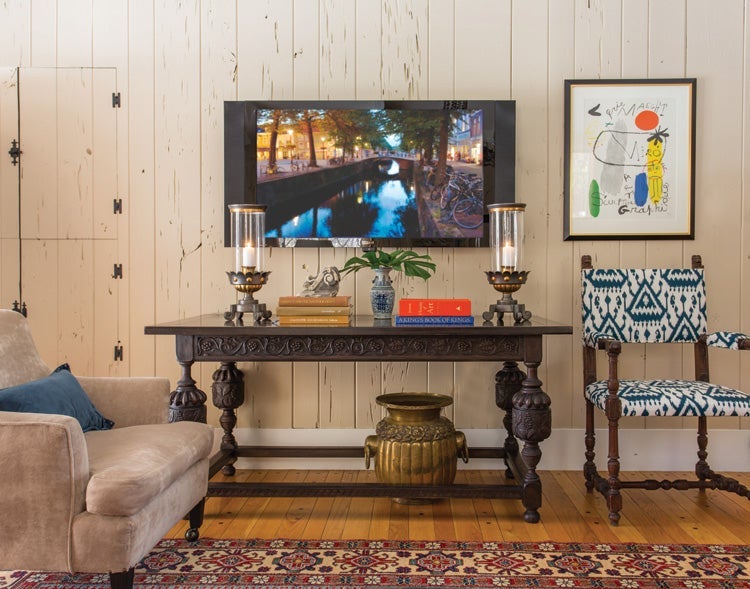