Most of the Roman ruins still remain in the south of France, especially in Provence. Via Aurelia, an impressive stretch of road built by the Roman Empire to maintain its control of the region, still exists, but just a few remnants remain today. The road lead through Le Rocher, the large rock formation with dramatic shape and reddish-brown color. Not far from Le Rocher sits the historic winery estate of Château de Palayson. 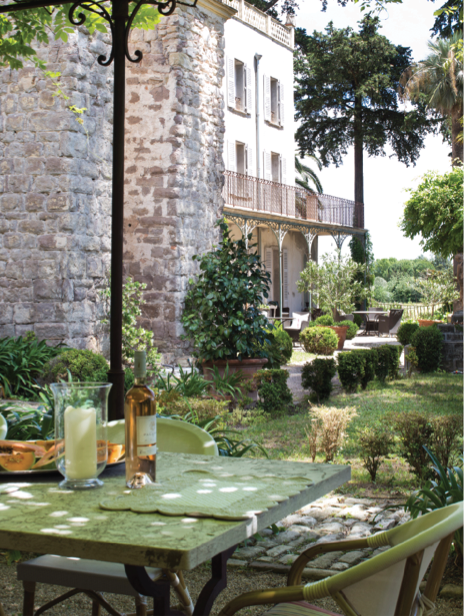 What was once the site of a monastery, is now a winery with a rentable vacation property, owned and run by the Swedish Christine von Eggers Rudd and her American husband Alan Rudd. The couple bought the property in 1999 after a close friend told them about a fairy tale castle with a vineyard in the immediate vicinity of Saint-Tropez. “We were on our honeymoon, chilling out with a nice rosé, when our friend decided to show us this Château,” explains Christine. “Alan and I had no intention of buying anything, until we saw Palayson; something inside us would not let us go.”
Christine says the circa-1500 castle and the twenty-four-acre vineyard were in deplorable condition, but the home's Moorish exterior amidst the palm trees was dramatic. “We were shocked by the condition,” says Alan, who renovated several historic houses in the past.” But we saw the potential of this rough diamond.”
After much thought and consideration, Christine and Alan decided to buy the castle and live on the property full time, with the goal to make it a working winery and ultimately an event and vacation destination for others. The purchase came with a stipulation though: Madame Cottino, the widow of the former owner, had the right to stay in the castle as long as she lived.
To accommodate their tenant, they decided to renovate and live in the beautiful villa next to the castle while they jumpstarted the winery. But just one year later, Madame Cottino passed away, and the couple refocused their efforts on the castle. “This completely changed our plans,” says Alan. They started the renovation of the castle immediately. It was cleared out completely (there was nothing old left to save), and reinforcements were made where walls were taken down.
The work that needed to be done to the Château, the garden, and the vineyards seemed never-ending. “I have never gone through such a complicated renovation,” says Christine, who had a career as an antique shopkeeper and decorated homes in Greenwich, Connecticut, Vail, Colorado and Long Island, New York. “New problems appeared constantly because of the age of the castle,” she adds. 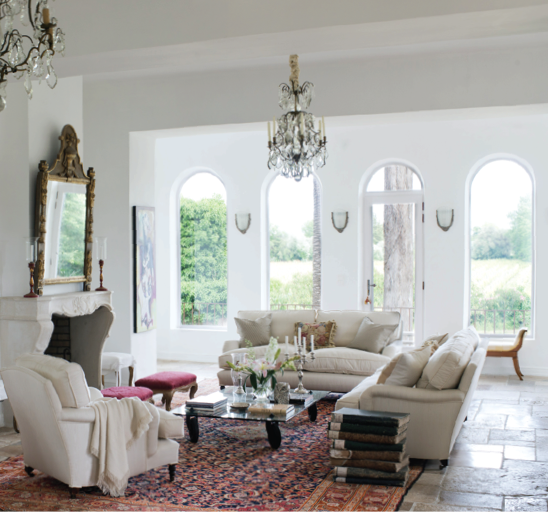 The couple also renovated the older part of the castle that resembles a tower of a former chapel. When they started excavating the property, they found the remains of a Roman villa. According to archaeologists, it was likely Villa Palaio, inhabited by a prominent person in the Roman Empire. Since the ancient Via Aurelia passed here, it was very likely that the building parts date back to the 200 BC, and by French law all this had to be preserved.
Christine made all the rooms very cozy looking with a mix of antique furniture and local rustic elements. She always loved to decorate. On Long Island, they lived in a typical Shingle-style house where they had an antique and interior design business. The home featured a mix of American, Windsor, and Swedish furniture, and here at Palayson, the furnishings fit perfectly with the Provencal style. “We had furniture with us from our former lives, and for the first time we had the opportunity to use all of them in the twenty rooms of the 34,444-square-foot castle,” says Alan, who has a background as an architect, city planner, and former entrepreneur in the office furniture business.
But not all the perks of the living on the property are attributed to the house. “One of the big advantages here in Provence is the amazing ingredients,” says Alan. Christine serves delicious tomatoes from their own garden with mozzarella for lunch, using olive oil made from their fifty olive trees, followed by beautiful melons and grapes for dessert. Alan serves an award-winning white wine, Coeur de Palayson, which is made of Viognier and Rolle grapes.
Château de Palayson is receiving international recognition for its red wines and is included in Le Guide Hachette des Vins (The Ultimate Wine Guide). The estate is open for business almost every day of the year. Tastings with a guided tour of the caves and property, along with a gourmet buffet lunch of local delicacies, can be arranged for groups of twenty-five to forty guests. Events such as weddings, receptions, concerts, and other special occasions can be hosted here as well. 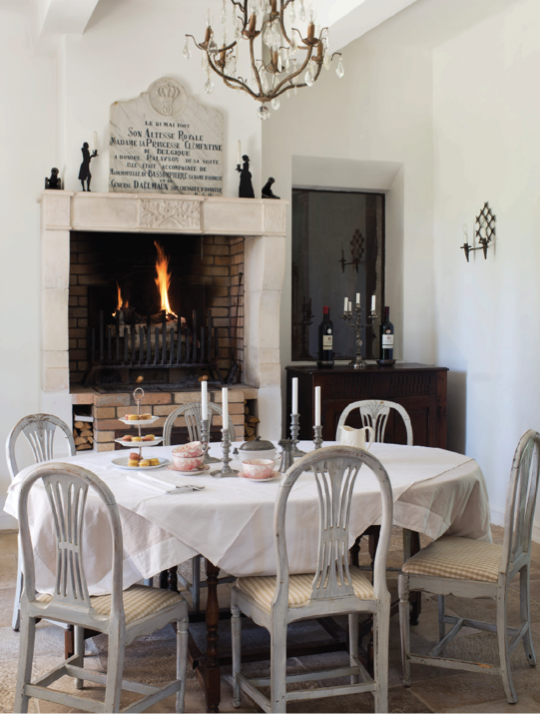 The villa where Christine and Alan first lived can be rented for your next vacation (www.palayson.com/villa).