Alberta home sales down year-over-year in May

The Alberta Real Estate Association (AREA) compiles provincial MLS® sales data for dissemination to REALTORS® and other interested groups. The data that is provided represents statistics provided to AREA by way of the Canadian Real Estate Association (CREA). For more detailed statistical information for Boards/Associations or for individual areas, contact your local real estate Board/Association or your local REALTOR®.
The Alberta Real Estate Association (AREA) reports that a total of 5,475 residential unit sales were recorded through the MLS® Systems of real estate Boards/Associations in Alberta in May, down 9.4 per cent from the same month last year. Part of this decline is reflective of the wildfire emergency in the Fort McMurray area, which resulted in the region being evacuated for nearly the entire month of May. 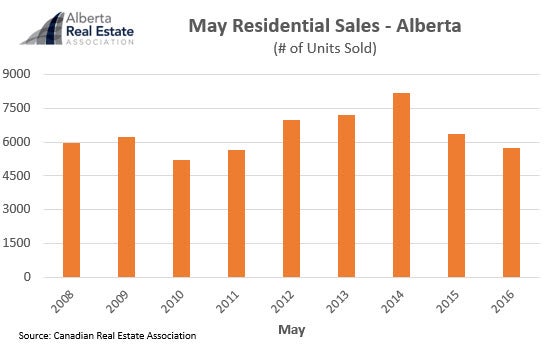 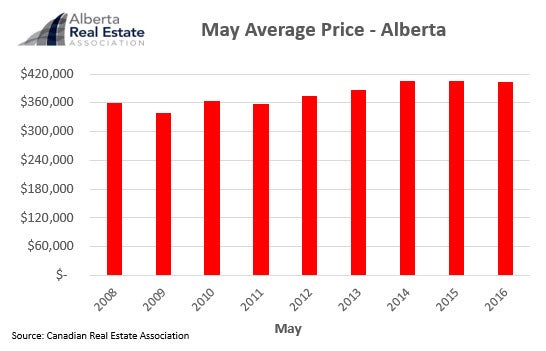 Four of Alberta's real estate Boards/Associations saw an increase in monthly residential average prices from year-ago levels:
Board Year-Over-Year Change Year-to-Date Change
Alberta West +5.6 per cent +0.3 per cent
South Central Alberta +4.9 per cent -12.4 per cent
Calgary Region +2.3 per cent +1.2 per cent
Edmonton Region +0.1 per cent -0.9 per cent
The remaining six Boards/Associations saw the monthly residential average price decrease to varying degrees from May 2015:
Board Year-over-Year Change Year-to-Date Change
Central Alberta -2.2 per cent -3.4 per cent
Medicine Hat Region -3.9 per cent -5.7 per cent
Lethbridge Region -4.5 per cent -1.7 per cent
Grande Prairie Region -4.5 per cent -6.6 per cent
Lloydminster Region (AB Only) -5.5 per cent -7.9 per cent
**Fort McMurray Region -21.3 per cent -15.8 per cent
**Note that Fort McMurray stats are based on a single sale which occurred prior to the wildfire emergency that saw the area evacuated for virtually the entire month of May.
Note: The data above is national data and may not perfectly reflect the data reported by a Board/Association. The numbers represented are for the full Board/Association region, rather than city/town proper areas that may be reflected in a board's name. Click here for a general guideline of Board/Association boundaries.
The value of all home sales in the province totalled $2.31 billion for the month, falling 9.9 per cent from May 2015.
There were 5.2 months of inventory at the end of May 2016, up from 4.2 months at the same time one year ago.
New listings on the MLS® Systems of real estate boards in Alberta numbered 10,802 units in May, a decrease of 1.1 per cent from a year earlier, while active residential listings numbered 29,589 units at the end of May, up 11.5 per cent from one year earlier.
Click here for the full release, including a breakdown of information by area. For more detailed statistical information, contact your local real estate Board/Association or your local REALTOR®.