Media release: Oversupply is slowing, but a buyers’ market remains 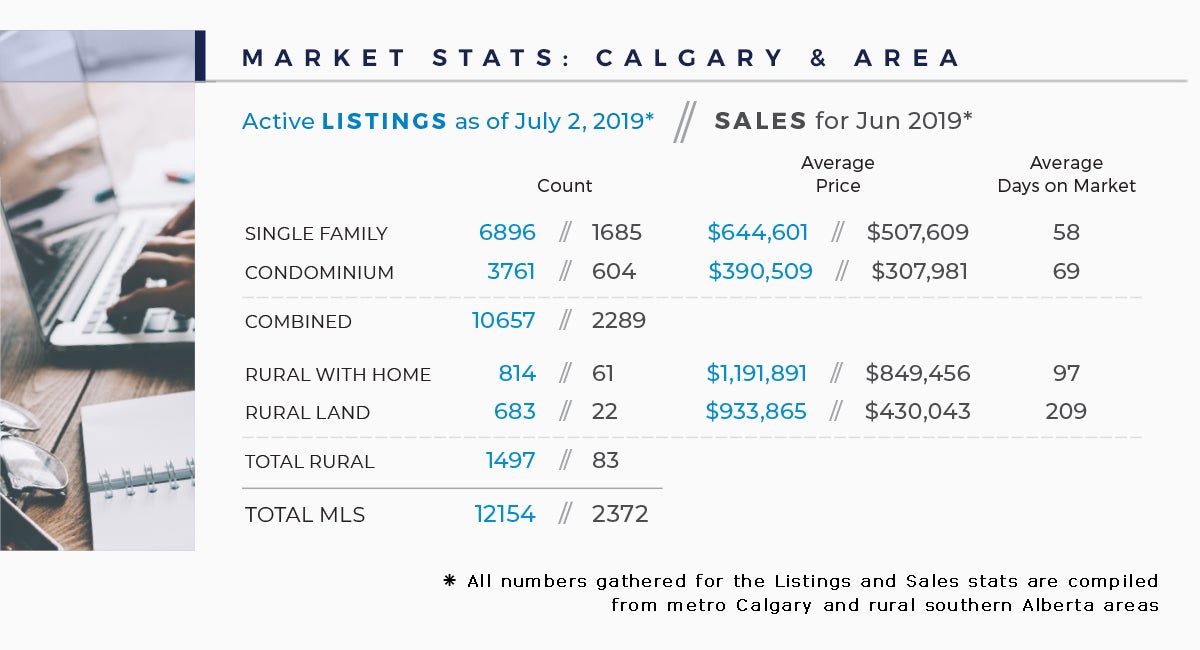 City of Calgary, July 2, 2019 – New listings coming onto the market continued to decline in June, which is helping to reduce the oversupply of homes in Calgary.
Year-over-year, new listings saw a decrease of nearly 19 per cent. Sales activity slowed this month compared to last year by six per cent, but the pullback in new listings was enough to cause inventories to fall by 13 per cent compared to last year’s elevated levels.
“So far, the housing market has generally behaved as expected this year. Sales activity remains just below last year’s levels, prices have eased and supply is starting to adjust to the lower level of sales,” said CREB® chief economist Ann-Marie Lurie.
“However, it is mostly product priced under $500,000 that is trending towards more balanced conditions.”
While the market still favours the buyer – with 4.3 months of supply – the amount of oversupply has eased and is slowing the decline in prices. As of June, the benchmark price in the city was $425,700, nearly four per cent below last year’s levels and comparable to unadjusted prices recorded last month.
HOUSING MARKET FACTS
Detached
Detached sales in June declined by nine per cent compared to last year, causing year-to-date sales to ease by nearly three per cent. The decline in sales was mostly driven by homes priced above $500,000.
Detached homes priced under $500,000 have recorded improvements in sales and oversupply reductions. The tightening in the lower end of the market will likely start to support price growth in this sector of the market.
Despite city wide year-to-date sales declines, activity improved in both the South and North West districts of the city. Sales did ease across other districts, but in some of the most affordable districts (North East and East) supply-to-demand ratios are improving compared to last year. This is pushing those markets toward more balanced conditions.
Despite slower sales activity, the amount of inventory declined by nearly 18 per cent. The reduction in inventories occurred throughout all districts.
Prices have remained relatively stable over the past few months, with some modest monthly improvements. However, the oversupply scenario has left prices nearly four per cent below last year’s levels.
Apartment
Apartment condominium sales eased in June, causing year-to-date sales to total 1,292 units. This is over seven per cent below last year’s levels. Over the same time frame, new listings eased by over 15 per cent, helping reduce some of the resale inventory in the market.
Resale inventory levels have declined, but the months of supply continue to remain elevated at 6.8 months. Combined with elevated inventories in the competing rental and new-home markets, this continues to weigh on resale pricing.
June’s benchmark price was $250,200, three per cent below last year’s levels. This is resulting in a total price adjustment of over 17 per cent since 2014.
Attached
Unlike other property types, sales activity for attached product continued to improve in June. Year-to-date sales total 1,955 units, nearly three per cent above last year’s levels. Improvements were driven mostly by growth in demand for semi-detached product. Attached sales improved across all districts except the North West and West.
New listings have eased compared to last year, which is starting to reduce oversupply in the market. Like all other sectors, the attached market remains oversupplied and this is impacting prices.
June’s benchmark prices were $399,700 for semi-detached and $286,300 for row product. Respectively, this represents year-over-year declines of 3.3 and 5.4 per cent.
REGIONAL MARKET FACTS
Airdrie
After the first half of the year, sales activity remained relatively stable. New listings have declined, which is helping to reduce the amount of inventory on the market and move towards more balanced conditions.
The market may be trending towards more balanced conditions, but oversupply continues to weigh on prices. The benchmark price was $334,800 in June, compared to last month, but nearly three per cent below last year’s levels.
Cochrane
Sales activity in the area remained relatively stable compared to last year and consistent with longer-term trends. New listings have eased, helping to reduce inventory in the market and the amount of oversupply.
Despite some recent adjustments, the market continues to favour the buyer, placing downward pressure on prices. The benchmark price was $404,000 in June, similar to last month and over five per cent below last year’s levels.
Okotoks
Sales have remained stable compared to last year, but they are still below longer-term averages. However, new listings are starting to adjust, which is continuing to push down inventory levels and cause the market to move towards more balanced conditions.
As the market moves towards more balanced conditions, this should help create more stability in pricing. As of June, benchmark prices were $414,900, 1.6 per cent higher than last month, but still 4.1 per cent below last year’s levels.