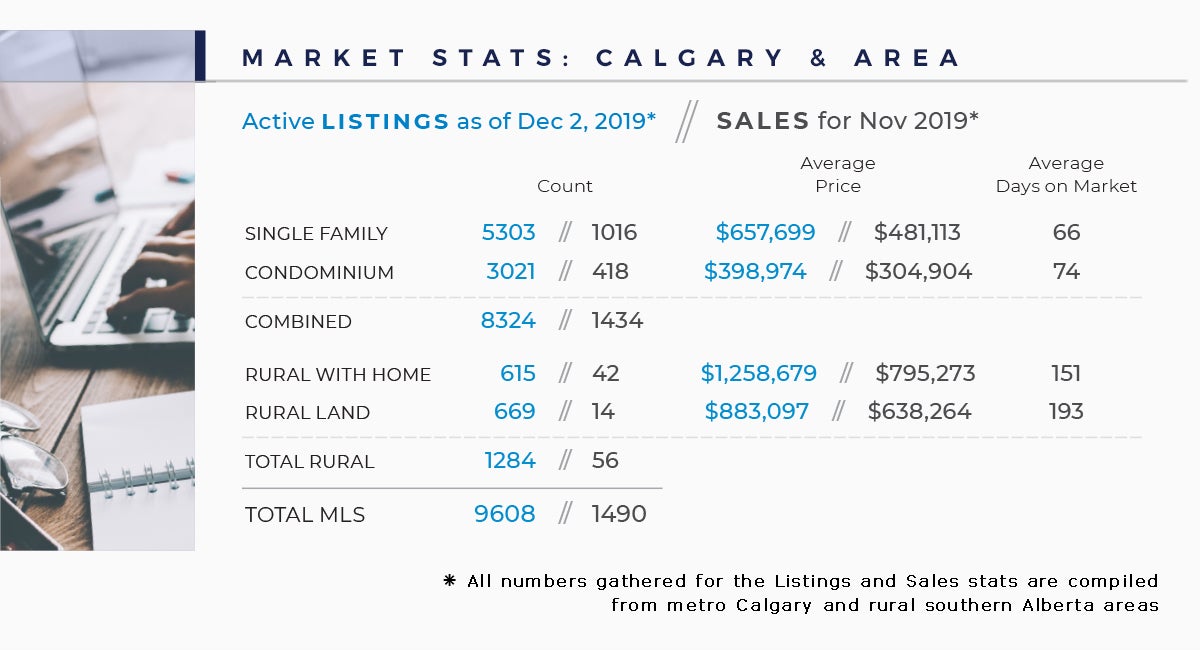 Media release: Calgary’s real estate market in December caps off 2019 with more signs of stability
City of Calgary, January 2, 2019 – December sales improved to levels more consistent with activity recorded over the past five years. This follows weak sales activity last year.
A stronger second half in 2019 was enough to push annual sales up by one per cent.
“Price declines, lower mortgage rates and some modest improvements in full-time employment helped support some demand growth in the city. Reductions in supply are also contributing to the slow adjustment to more stable conditions in the housing market,” said CREB® chief economist Ann-Marie Lurie.
“As oversupply in the market continues to ease, we should start to see more stabilization in prices. However, conditions continue to favour the buyer and this is weighing on prices.”
December unadjusted benchmark prices were $418,500. This is just slightly lower than last month and one per cent below last year’s levels.
Overall prices in 2019 declined by three per cent over last year’s levels. The total adjustment in prices is a 10 per cent decline since the 2014 slowdown in the energy sector.
While there are signs of stabilization, conditions vary significantly by location, price range and product type.
Improvements in the resale market have been mostly driven by lower priced product or areas where price declines were enough to bring more purchasers back into the market.
For more information on the 2020 housing market, the annual forecast report will be released at CREB®’s 2020 Forecast Conference & Tradeshow (www.crebforecast.com) on Jan. 14, 2020.
HOUSING MARKET FACTS
Detached
Improving sales in the second-half of the year helped offset earlier declines. This resulted in detached sales that are relatively unchanged from 2018 levels.
While city wide levels remained stable, homes priced under $500,000 recorded sales growth of nearly nine per cent. However, sales declined by 11 per cent for homes priced over $500,000.
When considering sales activity by district, sales activity eased or remained relatively stable across most districts. However, exceptions include the North West and South Districts which recorded annual sales growth.
Supply levels generally eased, but the adjustments were not consistent across the city as inventories rose in both the West and City Centre districts.
Detached benchmark prices were $480,100 in December contributing to the 2019 average of $484,808, three per cent below last year’s levels.
2019 price declines ranged from a one per cent in the North East district to a five per cent decline in the City Centre district.
Apartment
Stronger apartment style sales in December were enough to push annual levels to 2,672 units. This is just above last year’s levels.
The improvements were mostly driven by gains in the North, West and South East districts. This is offsetting the significant declines in the North East, North West and East districts.
New listings continue to ease across all districts except the South East. This district has seen a rise in new home construction and is likely contributing to some of the rise in new listings and inventory. Despite these trends in the one district, easing inventories relative to the sales have helped reduce some of the oversupply in this segment.
Reductions in oversupply helped ease the rate of decline in resale apartment condominium prices. However, prices in December remained one per cent below last years levels with a price decline range of five per cent in the West district to a one per cent increase in the South East district.
Attached
The attached segment of the market has seen the largest improvements in sales when compared to the other product types. Annual sales improved by nearly seven per cent for a total of 3,780 sales.
Both row and semi-detached product recorded improving sales with easing new listings and inventories. However, there was some variation depending on the district.
December semi-detached prices were $388,200 and row prices were $283,000. Both segments saw annual price declines in excess of three per cent and remain well below previous highs.
Depending on the district, the range of price activity varied significantly across the semi-detached and row segments. In 2019, price activity ranged from a seven per cent decline in row prices in the East district to a one per cent increase for semi-detached product in the North district.
REGIONAL MARKET FACTS
Airdrie
Improving sales over the past three quarters more than offset declines in the first quarter. This resulted in 2019 sales of 1,193 units and is four per cent higher than the previous year.
Rising sales was met with a pullback in new listings. This is helping to support further easing in inventory and the amount of oversupply in the market.
The reduction in the oversupply has helped support slower declines in prices, but prices remain nearly three per cent below last years levels.
Cochrane
The pace of sales growth did slow in the third quarter, but sales activity for the year improved by three per cent. Combined with a reduction in new listings, this helped push down inventory levels and reduce the amount of oversupply in the market.
Prices continue to ease in the market as competition from the new home market has likely weighed on resale prices. In 2019, benchmark prices averaged $403,250, nearly four per cent below last years levels and seven per cent below 2015 highs.
Okotoks
Strong sales throughout most of the second half of the year offset earlier pullback and resulted in sales growth of ten per cent. New listings eased compared to sales bringing down inventory levels and the months of supply compared to last year.
The amount of oversupply in the market has eased compared to the previous year. This is helping to reduce downward pressure in prices over the fourth quarter. On an annual basis, prices remain nearly four per cent below last years levels, and over five per cent below previous highs.
Source CREB