2020 opens with a slight gain in sales 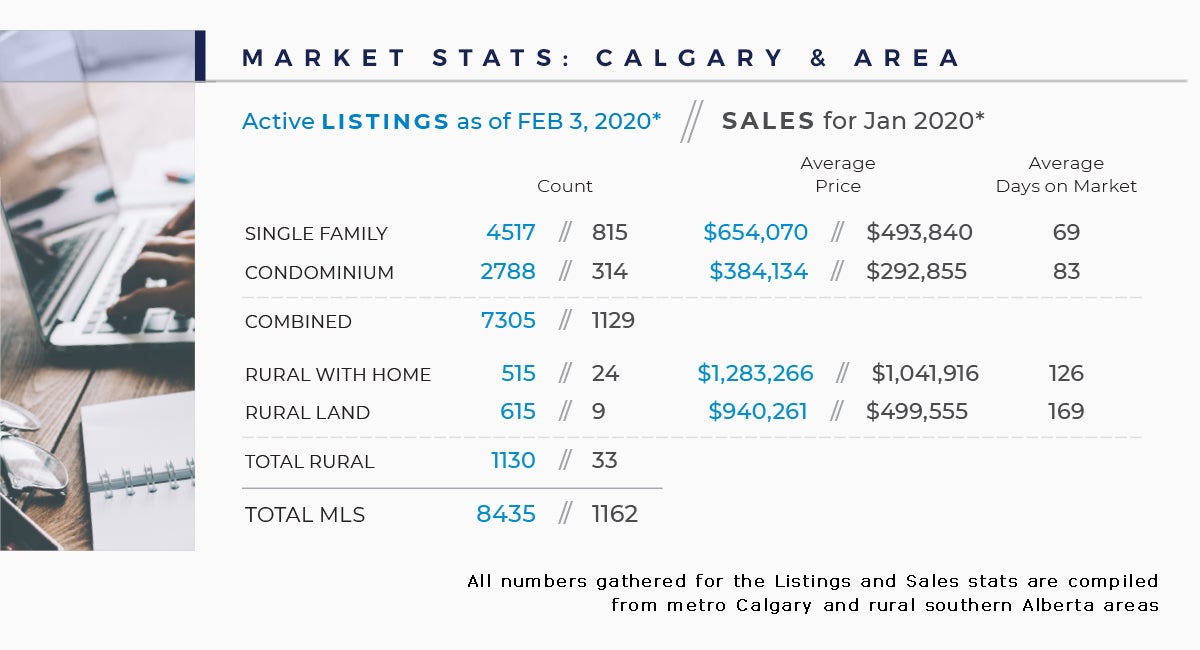 Housing market conditions continue to follow similar trends to last year, with gains in sales.
At the same time, there have been further reductions in new listings, inventory and more declines in prices.
January sales activity was 863 units, nearly eight per cent higher than last year’s levels. While sales remained well below January activity recorded before 2014, they remain consistent with activity recorded over the past five years.
“A persistent slowdown in the energy sector has resulted in a reset in many aspects of our economy. This includes the housing market,” said CREB® chief economist Ann-Marie Lurie.
“We continue to see the slow adjustment to more balanced conditions, but it will take time before that starts to translate into price stability.”
Citywide unadjusted benchmark prices were $417,100 in January. This is slightly lower than the previous month and nearly one per cent lower than last year’s levels.
Benchmark prices eased, but there were some modest improvements in both the average and median prices. This is likely a reflection of some changes in the distribution of sales.
HOUSING MARKET FACTS
Detached
Detached sales in January improved by six per cent, thanks to growth in all districts except the North East.
New listings declined by nearly 11 per cent due to pullbacks in all areas except the City Centre and the North districts. Combined with adjustments in sales, this caused inventories to ease by 15 per cent citywide.
Reductions in supply and gains in sales supported reductions in the months of supply from nearly six months last year to just under five months this January.
Detached benchmark prices eased by nearly one per cent compared to last year. However, the only two areas to record notable year-over-year declines were the City Centre and West, with price declines exceeding three per cent.
Apartment
Improving sales were met with gains in new listings, causing inventories to increase by 12 per cent compared to last year.
The gain in inventories prevented any significant adjustment in the months of supply, which remained elevated at nine months.
The persistent oversupply continued to weigh on benchmark prices, which eased compared to last month and declined by two per cent compared to last year.
Attached
Despite slower sales in the South and South east district, city-wide attached sales improved by four per cent.  At the same time new listings eased by nearly 18 per cent, causing inventories to decline by ten per cent.
Improving sales and a drop in inventory helped the months of supply to dip below seven months, a significant improvement compared to last year’s level of nearly eight months.
While this segment is trending toward more balanced conditions, persistent oversupply continues to weigh on prices, which trended down over the previous month and eased by over one per cent compared to last year’s levels.
REGIONAL MARKET FACTS
Airdrie
Improving sales and easing inventories helped push the months of supply down to 4.7 months. This represents levels that are consistent with longer-term trends and reflects relatively balanced conditions.
The improvements in the supply relative to demand have started to generate much more stability in prices, which have remained comparable to last month and slightly higher than last year’s levels.
Cochrane
January recorded a significant gain in sales and a significant drop in new listings. This resulted in a drop in the months of supply to four months, a significant improvement from the 14 months recorded last January.
If the improvements continue, this should start to support price stability. However, the recent change has not yet impacted prices, which remain nearly three per cent lower than last year’s levels.
Okotoks
Sales activity in town improved to levels consistent with longer-term trends. The improvement in sales helped offset the slight rise in new listings, helping reduce inventories and bringing the months of supply down to levels more consistent with balanced conditions.
The steady reduction in oversupply in this market is helping to generate more stability in prices. In January, benchmark prices remained comparable to levels recorded last year.
Source CREB