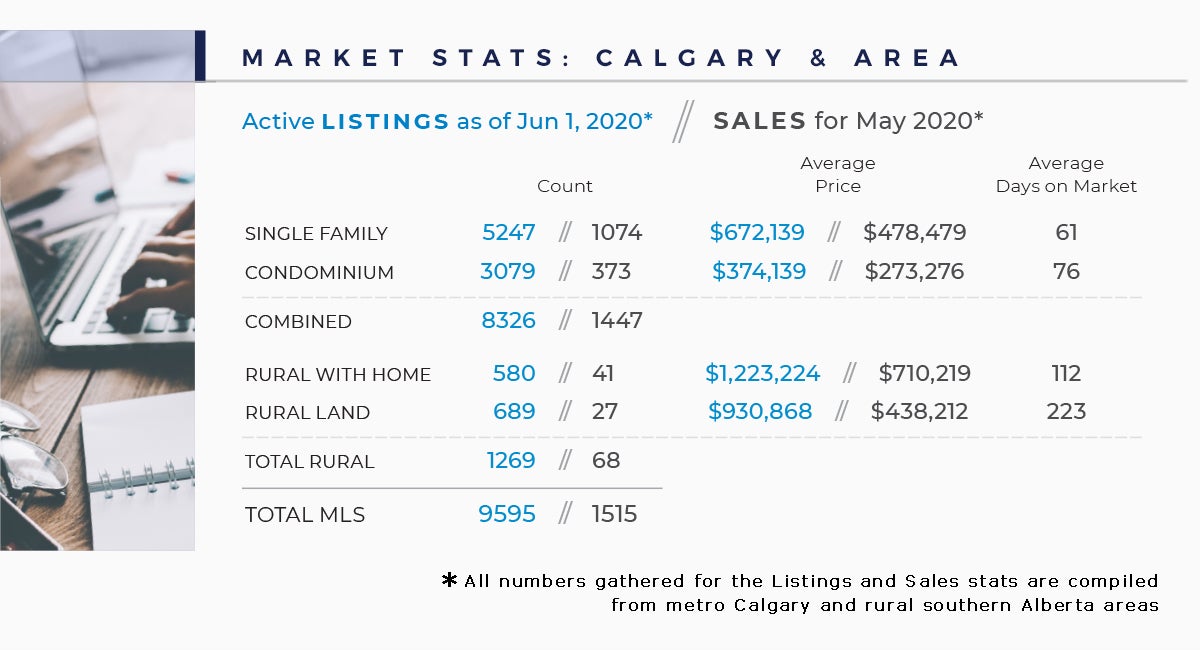 City of Calgary, June 1, 2020 –
Housing market activity in May remained slow, but sales exceeded the lows from April, which saw less than 600 sales in Calgary.
May sales totalled 1,080 units, a 44 per cent decline from last year's figures.
"The initial shock of COVID-19 and social distancing measure is starting to ease. This is bringing some buyers and sellers back to the market. However, this market continues to remain far from normal and prices are trending down," said CREB® chief economist Ann-Marie Lurie.
"Activity has also shifted toward more affordable product, which is likely causing differing trends depending on product type and price range."
Sales are down in all price ranges, but a greater share of sales are priced below $500,000.
In the higher price ranges the drop in inventory has not been enough compared to the drop in sales. Additionally, the months of supply is far higher than the already elevated levels seen during the past five years.
The shift in sales toward lower-priced product is contributing to steep average price declines in the Calgary market.
Benchmark pricing, which reflects comparisons of the same type of home, has eased by over two per cent compared to last year and 0.4 per cent compared to last month. This does not come as a surprise as the market continues to struggle with more supply than demand.
COVID-19 and social distancing measures have contributed to rising unemployment rates and job losses throughout many economic sectors. This is weighing on consumer confidence and the housing market. Some of this job loss is temporary, but the energy sector remains the largest concern.
Significant job loss throughout the typically higher-paid professional and technical services sector points to a longer adjustment period in the housing market, particularly in the higher end of the market.
HOUSING MARKET FACTS
Detached
Detached sales eased across the city, with the largest declines occurring in the West district.
May sales totalled 670 units. This is a 43 per cent decline over the previous year.
The decline was met with lower inventory levels. However, it was not enough to change the oversupply situation. Citywide months of supply remained above four months.
For the higher-priced districts – the West and City Centre – the months of supply rose to seven months.
Detached home prices trended down in May compared to the previous month and remained nearly two per cent below last year's levels. Declines varied across the city, with the highest price declines occurring in the City Centre, West, North West and North East districts.
Apartment
Apartment sales totalled 137 units in May, an improvement from the 95 units last month. However, this is still nearly 60 per cent below last year's levels. The pullback in inventory was not enough to offset the slower sales, and the months of supply jumped to 10 months.
The benchmark price continued to fall and is now more than two per cent lower than last year's levels. The average and median prices fell at a significant rate. This is because a large share of the sales occurred in the under-$200,000 price range.
Benchmark prices eased across all districts, but the year-over-year decline was the highest in the North East district, with declines of over five per cent.
Attached
Mirroring the trend from other property types, sales for attached product slowed by 35 per cent compared to last year for a total of 273 units. Inventory levels eased to 1,503 units and months of supply totalled 5.5 months. The months of supply has eased from the levels recorded last month, but it remains elevated relative to historical levels for this time of year.
The benchmark price trended down for attached product, declining by nearly one per cent over the previous month and nearly four per cent compared to the previous year.
REGIONAL MARKET FACTS
Airdrie
Sales in Airdrie totalled 99 units in May. Activity has slowed compared to previous years, but the decline has not been as steep as what has been recorded in Calgary. The region has also seen a similar decline in new listings and inventory levels. This has helped push the months of supply back to four months, which is similar to the levels recorded prior to the COVID-19 outbreak.
Benchmark prices have eased slightly compared to last month and are relatively stable compared to last year. However, there has been a notable decline in both the average and median prices. The decline in average and median prices is mostly related to the significant shift in activity by price range, as sales continued to improve for product priced below $300,000.
Cochrane
Sales in Cochrane have slowed, but the pullback in new listings has outpaced the easing sales. This is causing inventories to fall and lowering the months of supply to under five months, a decline of 9 per cent compared to last year.
However, the impact of previous months oversupply has weighed on benchmark prices, which have eased by two per cent compared to last year. However, unlike other areas, the average and median prices have been rising, as sales in the $400,000 - $499,999 range remained stable compared to last year and represent a larger share of overall sales compared to last year.
Okotoks
While improving slightly compared to last month, Okotoks sales have remained relatively weak in May. At the same time, inventory decline has helped offset the slower sales, leaving the months of supply at four months.
The benchmark price trended down for the third month in a row and year-to-date levels are now two per cent lower than last year.