Home sales rise along with supply 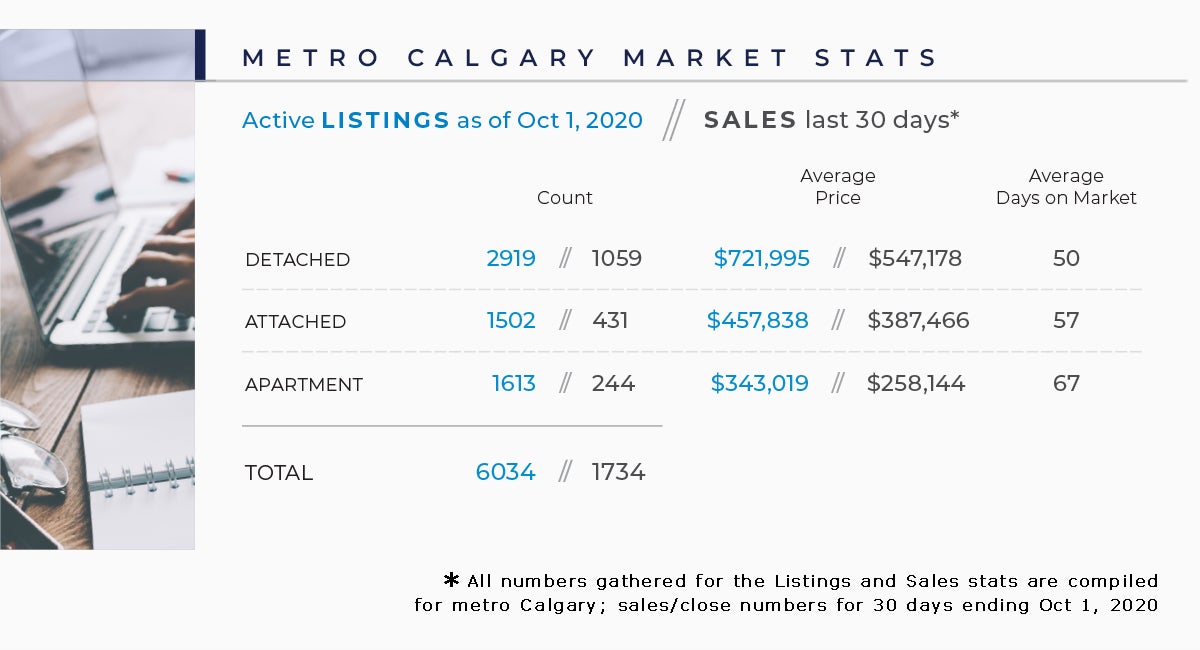 City of Calgary, October 1, 2020 –
September sales activity jumped to 1,702 units, the strongest September total since 2014.
New listings in September improved over last month, but levels remained comparable to the previous year. The increase in sales relative to new listings did prevent any monthly gains in inventory levels, but supply in the market is still down 12 per cent compared to last year.
"The recent rise in new listings, combined with low lending rates and softness in prices, has helped support some of the recent upward trend in sales," said CREB® chief economist Ann-Marie Lurie.
"However, conditions vary significantly based on the price range and property type."
The adjustment in supply relative to demand has caused the housing market to move toward more balanced conditions. The current 3.7 months of supply represents the most balanced conditions seen for September in over five years. This has helped support some of the recent monthly gains in prices.
Total residential benchmark prices have trended up over the past three months, resulting in September prices that are similar to prices recorded at the same time last year.
Despite some of the recent improvements, the impact of COVID-19 is still present. Year-to-date sales remain nearly nine per cent below last year's levels, while city-wide prices are still over one per cent lower than last year. Considerable risk also weighs on the housing market due to economic uncertainty and a struggling labour market.
HOUSING MARKET FACTS
Detached
With significant gains in the $400,000 - $600,000 range, September sales are the highest they have been since 2014.
Improving sales and easing new listings resulted in further reductions in inventory levels and caused the months of supply to ease to balanced territory. Recent improvements in the supply/demand balance have supported some upward price movements. As of September, the benchmark price was nearly one per cent higher than last year.
However, the year-over-year gains have been driven by the more affordable end of the market, as prices remain well below last year's levels in both the City Centre and West districts of the city.
Semi-Detached
Given some recent monthly gains in new listings, sales in this sector improved in September, but at a slower pace than both the detached and row sectors. This could be related to the significant pullback in inventory.
September inventory levels were nearly 21 per cent lower than last year, the largest percentage decline in inventory among all property types. This shift in supply, along with improving sales, has started to help reduce the oversupply in this sector and ease the downward pressure on prices.
September prices remain nearly two per cent lower than last year's levels, but prices have started to improve in the South, South East and East districts of the city.
Row
Sales in this sector have continued to trend up for the past several months and September sales were significantly higher than last year's levels.
While it was not enough to offset the pullback that occurred during the COVID-19 shutdown, row sales activity is four per cent lower than last year's levels. The growth in sales could be related to the significant price adjustment that has occurred in this sector.
Prices in this sector have eased by seven per cent compared to last year and remain nearly 17 per cent below previous highs.
Apartment Condominium
All other sectors have seen some recent year-over-year gains in sales, but this sector continues to trend in the other direction. Year-to-date sales declined by 16 per cent, the largest decline among all property types.
At the same time, new listings continue to rise, which is causing further inventory gains. This is keeping the months of supply above seven months.
There have been some districts showing signs of price stabilization, but overall, year-to-date prices have eased by more than two per cent, amounting to a total adjustment from 2014 highs of over 18 per cent.
REGIONAL MARKET FACTS
Airdrie
For the fourth consecutive month, year-over-year sales improved. As a result, year-to-date sales for the city total 1,055 units, a nine per cent increase over the previous year.
While new listings did rise this month, the improvement in sales outpaced the gains in new listings, preventing any significant shift in monthly inventory levels.  However, inventory levels are over 20 per cent lower than last year's levels. And the months of supply has fallen to levels not seen since 2015. While prices remain below previous highs, tighter market conditions over the past four months have supported several months of price growth and September price levels are nearly one per cent higher than last year. These price gains were enough to cause year-to-date levels to stabilize relative to last year.
Cochrane
A reduction in new listings limited sales growth in September compared to August. However, September sales remain higher than last year and contributed to a year-to-date gain of nearly nine per cent.
Rising sales and easing inventories have kept the months of supply below four months, the lowest level seen since 2014. Tighter market conditions have supported an upward trend in prices over the past three months. The recent price gains did translate to year-over-year gains in September, but were not enough to offset earlier pullbacks, as year-to-date prices remain nearly two per cent lower than last year's levels.
Okotoks
September sales continued to improve from the low levels recorded earlier in the year and levels recorded last September.
However, recent improvements were not enough to offset earlier pullbacks. Sales remain three per cent lower than last year's levels, but this could be related to reduced inventory in the market.
Reductions in supply relative to demand have caused the months of supply to decline to three months. The tighter market conditions have caused prices to trend up over the past four months. However, both September and year-to-date prices remain lower than previous year's levels.
Source CREB